Discipline doesn’t have to involve anger or screaming. It can be calm, easy, and less time consuming. With Discipline Draw, discipline will become more consistent which is most important to get good behavior. Stress levels for both children and parents will be markedly reduced. Kids and parents will both know what to expect without fear. When rules are broken, the child will pull one to two cards from the deck depending on the severity of the issue. The cards and fate determine their punishment rather than the parent so no guilt or anger is involved. Usually, kids pull just the right card for the offense whether it be a chore, an apology, timeout, loss of privilege, a cool-down technique, or something else. The cards use several different discipline techniques. The deck includes several blank cards to add your own ideas and customize it to your family. All children quickly learn that there are consequences to their actions so that they think before doing something. 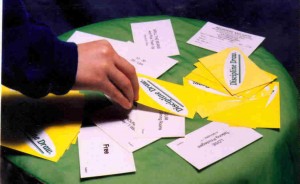 Using Discipline Draw in multiple homes of divorced parents can help children feel safer and more secure while also making it easier for added step-parents to fit in and doing away with one of the biggest things parents tend to disagree on. Step-children and adopted children will be disciplined exactly like the other kids and feel more secure in their new family.

For discipline to truly work, good behavior should also be reinforced and rewarded. Everyone likes a pat on the back now and then! Reward Roulette makes rewarding easier than ever. No need to think up something fast and they keep it simple. Again, consistency is key and it helps if all parents reward in the same way. Like dipping into a treasure chest, the excitement and glee of pulling a card to be rewarded with money, rent a movie night, a big bear hug, or something else will make everyone’s day. Just like Discipline Draw, several blank cards are included so you can add your own ideas. You can remove cards that don’t fit your family.

Warning: both decks include a FREE card which provides no punishment or reward to teach another important fact of life. You may choose to use them or not.